We are thrilled to announce that two of our very own DevRel software engineers, Mansi Shah and Kevin Lacaille, were selected to present a tutorial titled Eroding Coastlines: A GeoSpatial and Computer Vision Analysis at Scientific Python 2022 conference in Austin, TX. 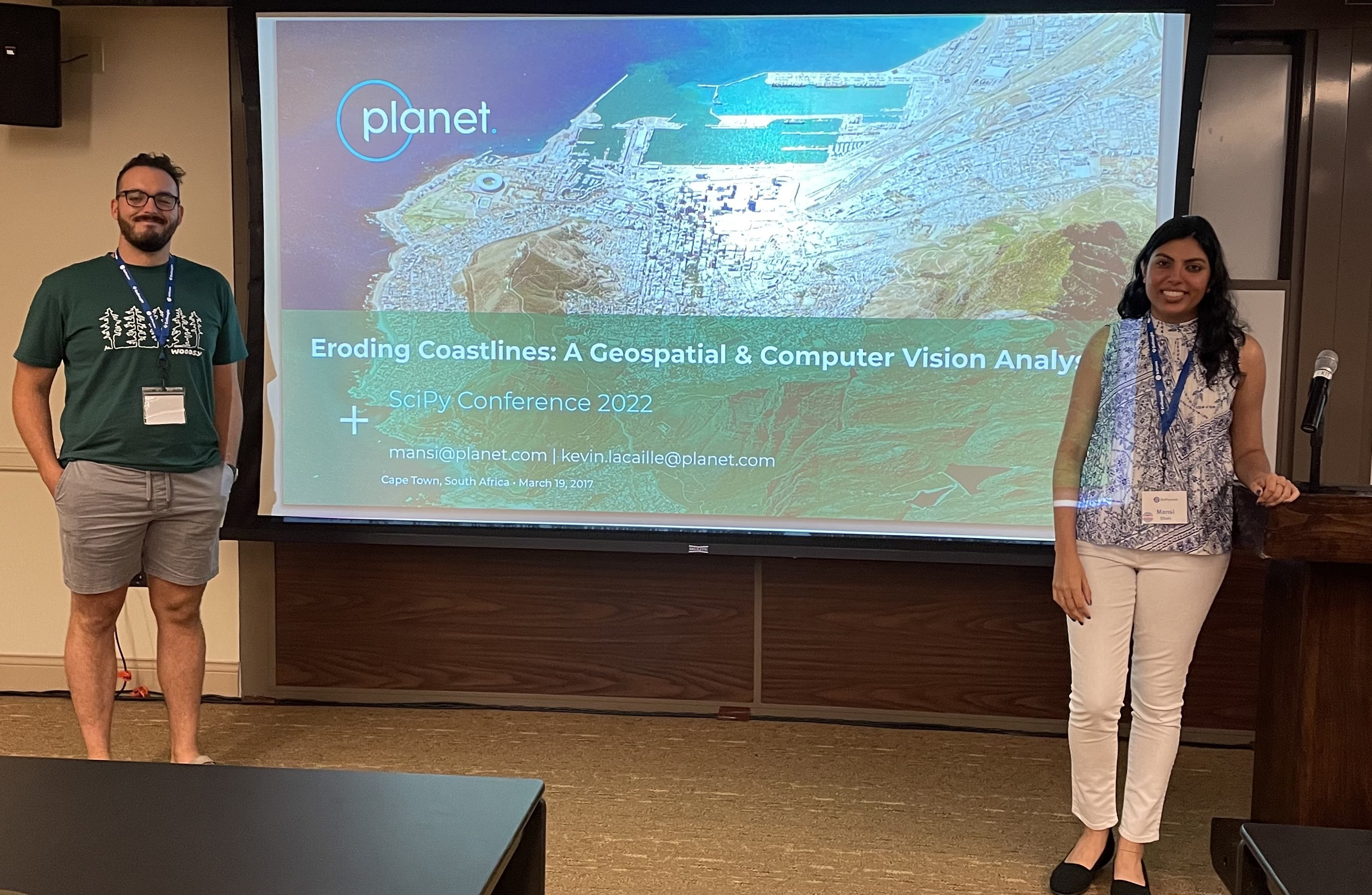 According to their website, the annual SciPy Conference “brings together attendees from industry, academia, and government to showcase their latest projects, learn from skilled users and developers, and collaborate on code development.”

Participants of Mansi and Kevin’s workshop gained hands-on experience exploring some of Planet’s publicly-available satellite imagery using Python tools such as rasterio, numpy, matplotlib, scipy, and openCV, to analyze medium- and high-resolution imagery data. During the second half of the workshop, participants applied what they learned to identify and analyze instances of coastal erosion, one of the most pressing environmental and humanitarian challenges facing our planet today. The tutorial involved a combination of slides and hands-on, live coding with real-world publicly-available data in Jupyter notebooks – no previous experience with geospatial or computer vision Python libraries necessary.

Coastal Erosion – Why It Matters

Coastal erosion is defined as the loss or displacement of land on coastlines due to waves, currents, tide, wind, waterborne ice, storm impact, and other natural and unnatural forces. While the natural weathering of coastlines is normal, human-led activities such as coastal mining, infrastructure development, and construction can accentuate the issue. Let’s also not forget rising sea levels are a result of climate change. The IPCC states with high confidence that the Global Mean Sea Level (GMSL) has risen 3.6mm each year, on average, from 2006-2015. Risk related to sea level rise, including erosion along all low-lying coasts, is expected to significantly increase by the end of this century without major additional adaptation efforts. Long-term impacts of coastal erosion include loss of habitat quality, degradation of coral reefs, increased turbidity of water, reduced tolerance for communities in the face of natural disasters, and reduced sand volume. These environmental impacts are in addition to the millions of dollars lost and spent annually on coastal property loss, tourism collapse, and erosion control measures in the U.S. alone.

Inspired by Crawford et. al (2020), the case study for this tutorial analyzed a severe example of coastal erosion, centered on a small, 7 km (4 mi), coastal region in Kamalnagar, Bangladesh. This region is located in Southern Bangladesh, where the ocean (Bay of Bengal) meets a major inlet, the Meghna River. Coastal erosion in Bangladesh is a recurring problem, causing thousands of people to be displaced annually. In fact, coastal Bangladesh experiences erosion rates that are among the highest in the world.

The workshop began with some geospatial and computer vision techniques, then moved on to apply those techniques to detect and analyze coastal erosion. The workshop focused on:

The folks attending the workshop created a data and image processing pipeline. Then they detected and measured the effects of coastal erosion in Kamalnagar, Bangladesh. They found that over the past 5 years the land had receded about 2 km (1.2 mi) and that the region had lost about 11 km2 (2742 acres) of landmass. On average, this translates to the region losing about 400m (1300 ft) of coastline and about 2.2 km2 (550 acres) of landmass, each year. In addition to identifying coastal recession, our analysis showed that the recession was speeding up year-over-year, consistent with what the authors of Crawford et. al (2020) had found.

The workshop demonstrated that not only can geospatial data be beautiful, but it can also be used for great scientific purposes. In this case, it can be used to identify areas critically affected by natural disasters, which are prime candidates for humanitarian aid.

Our planet is important to us. One of Planet’s ethical principles is to protect the environment: “we actively develop and support uses of our data, products and services that address the critical planetary crises of our time, from climate change to the loss of nature.” This carries into our work in Developer Relations. We reflect this deep care for the environment in our work. Whether our tutorial attendees are environmental scientists, geospatial experts, or completely new to the field, a key part of our role on team DevRel is to engage and empower developers. At Planet, we enable technical users to do amazing and intentional things with our data. We’re here to support the search for answers.

Kevin and Mansi were excited to engage with users of Planet’s data and the broader Python developer community around technical topics and environmental issues that matter. This was Planet Developer Relations’ first in-person presence at such a conference since 2020. We’re looking forward to reconnecting with old connections and building new ones. And we hope to see you there! Mansi Shah and Kevin Lacaille presented their tutorial at the SciPy 2022 conference in Austin, TX on July 11, 2022 from 8:00am-12:00pm CDT. Watch their presentation on YouTube. Try your hand at the Coastal Erosion Jupyter Notebook.